Jennie’s bridal shower was too much fun. It was exciting to plan, wonderful to be with family and friends, and even enjoyable to clean up. (Don’t miss the video at the end!)

I had the shower here at the house in my mother’s old “apartment” when she lived with us. The room is now known as my @Home Classroom.

I apologize for the very blurry “After” picture. It’s the only one I have. It’s not even taken from the same spot as the “Before.” But did you notice the seven hand-dyed tablecloths, each a different color? Just proves that 120″-wide muslin quilt backing can be used for other things. And the matching napkins? I ran out of fabric for the napkins so some are smaller than others. I randomly placed them on the tables. That took about 35 minutes. I don’t do random all that well. (It’s safe to click all the rest of the pictures to see nice, large, crisp photos without getting sick to your stomach.)

Our Jennie was named after her maternal great-grandmother, Jennie Gottesman. The “original” Jennie’s dishes, stemware, and silver were passed down to my mother and then to “our” Jennie. They’ve been stored in our basement for years so it was only fitting that they were used for Jen’s shower. In between polishing the silver and cleaning up the upstairs, I found an old photo album. Inside was a very old photograph showing a holiday dinner served on the very same dishes. Here’s another “Before & After.”

In addition to the photo album I found a guest book signed by all the attendees of my mother’s bridal shower in 1945. I wish she was still here to remind me who wrote all the heartfelt messages wishing her a happy life with my father.

As I flipped through the pages out fell the card my “Grandma Jennie” gave to my mother with her shower gift.

(I never really knew my grandmother. Shortly after I was born she had a series of severe strokes. She was bedridden the whole time I knew her. I never heard her speak.)  I had no idea she was so creative! Nor can I imagine never having “found” that card before now!

When guests arrived on Saturday we asked them to take an envelope and address it to themselves, using pens stuffed with fabric. (Actually the fabric is wrapped around the “ink thingy.”)

Jennie drew from the self-addressed envelopes  to award the flower centerpieces throughout the day, AND won’t have to address thank-you envelopes! 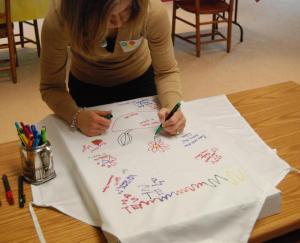 I also asked guests to write a message, draw a doodle, or just sign their names with permanent pens on a butcher’s apron for Jennie.

Years ago, after my parents were first married, my mother had a big dinner party and asked everyone to to sign a butcher’s apron. She later embroidered their signatures, drawings, and messages. I stitched that original apron into the back of the quilt I made for her 70th birthday. You might remember seeing the front of the quilt on the cover of Creating Scrapbook Quilts. 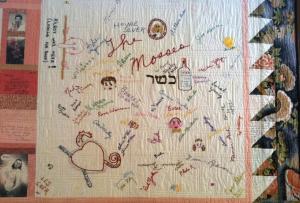 Shower games included “Who Knows Jennie The Best” and a take off on the old chestnut where items are placed on a tray, passed around, and then shower guests have to try to write down as many items as possible from memory.

Winners received zipper pins like this one. (Have I mentioned that I am the new owner of a glue gun. Totally FUN!)

Jennie’s great Aunt Elaine and Uncle Bud live in Florida, but we wanted to include them as much as possible in the festivities so we “Face-Timed” during the shower games and when Jennie opened the presents so they could be a part of it too.

You’ll notice a giant poster of Craig and Jennie on the wall framed with fabric scraps from the tablecloths. I made the poster online at www.blockposters.com. You upload a photo and it creates a PDF based on the size of the image and the number of pages you want to tape together. Just ignore the images of a crazed-looking guy with the hatchet on the website. I had the pages printed on a color printer at Office Max.

As Jennie opened each gift, Craig’s nieces delivered a rose bud to the person who gave the gift. The bud was made by wrapping two Hershey’s Kisses in red cellophane (flat bottom to flat bottom) and then wrapping the “bud” on the rose stem with floral tape.

Silk roses were 60% off at JoAnn Fabrics. It still probably would have been cheaper to buy real roses and just eat those, but math skills escape me when I shop. If anybody has any great ideas for the blossoms I yanked off to make the chocolate buds, you can have them!

Even cleaning up was fun because Jennie stayed and we washed everything up and put it all away together. Scooter provided the entertainment.

57 thoughts on “The Bridal Shower”