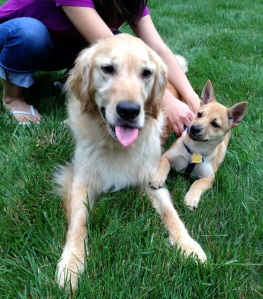 Mom’s packing for her trip to Atlanta so I have a few minutes.

I just became an uncle. My sister Jennie (head cut off in photo) and her husband have a new dog named Maizie. They live in Ann Arbor so she’s named after University of Michigan colors, but she is not any of those colors. She is the same color as me. Must be a people thing.

Maizie is part chihuahua and part German shepherd and lots of other parts. She likes to run very fast and dig holes. Not at the same time.

She was afraid of me at first, but then she showed me who is the boss. Maizie is the boss. Here is a movie of Maizie and me.

But more about  me. Remember how I like small places, like behind the toilet? My other favorite spot to relax is in the living room behind the couch. I like to squeaze in there while nobody is looking and then I watch TV with Mom and Dad from the opening underneath. I can only get to the behind the couch place by going around behind Mom’s chair. The other side is blocked off with a big stereo speaker.

I don’t like to back up because it’s hard for me to see around my large behind. So I have figured out my own unique way to exit the couch area.

Mom’s cousin Niki, who you know from buying quilts in the AAQI booth at International Quilt Festival in Houston, has a dog and a bird and two cats. (She told me to tell you that if you want to help in the booth this year, you should sign up here. Otherwise she’ll scratch you behind the ears if you just want to come and buy a quilt. Wait, that last part about the ear-scratching was for me.)

Anyway, one of Niki’s cats is named Beijing and he is starring in a TV commercial with someone called Robert Downey Jr. I’ve watched it several times and I don’t know what they are selling, but in the Hold That Cat part, the cat is Beijing.  You should watch it and hit paws so you can see the cat part better.

I hope you have a nice day tomorrow. I will be moping by the door waiting for Mom to come home.