I went to bed Friday night with a dull ache in my head. I was beat. Too many long days in a row. I was looking for an adventure on Saturday, something different, something out of the ordinary, but I had  no ideas.

I slept in Saturday morning. Scooter was in a cuddly mood (good dog) and Steve was getting ready for errands and some time at school. About 8:30 a.m. Steve came in to tell me that he just heard my father’s name on the radio! My dad died in 1984.

Retired Staff Sgt. Harry Millnamow, 91, had just been interviewed on WJR, a Detroit radio station, about a reunion of the 483rd bomb group from WWII in Romulus, Michigan. My father’s name was mentioned in this context. The veterans were meeting at the airport Marriott. Well, there was the adventure I was looking for!

I jumped out of bed, showered and dressed, called the hotel to confirm, and threw a camera and the quilt I had made about my dad’s life into a bag, and headed towards the airport. It took me a little over an hour to get there.

As I drove, I spent equal amounts of time wondering why I was doing this and trying to recall anything my dad might have told me about the war. He didn’t say much. I remember asking when I was little, but I was born 10 years after he came home. The things I remembered were rather odd:

1. He was in Ft. Collins, CO and Tampa, FL before he shipped out. I have pictures of my grandparents and mom visiting him there and remember that he had to shake his boots before putting them on to make sure the snakes and scorpions fell out first. He spent most of his tour of duty in Italy, a place called Foggia. In 1962, when we lived in Italy we went to Foggia and he pointed out metal structures (perhaps from runways?) left behind by the allies that were then incorporated into some of the buildings. I was seven years old then, so who knows if I even understood what they were.

2. He was a sergeant and was in “intelligence.” He said he never saw combat, but I question that now. He was hit in the back by a machine gun. Not a bullet, the gun. It came loose from it’s moorings in the plane and slammed into him. I think one would have to have been flying in the plane at the time for that to happen. He spent some time in the hospital and had a “bad back” for the rest of his life.

3. While in Italy, a crazy colonel shot bugs off the inside of his tent with a pistol, there was a monkey in the camp, and my dad and his buddies liberated an anchovy factory! 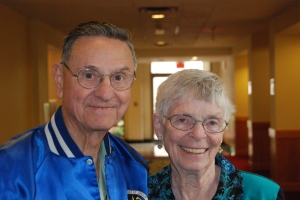 When I got to the Marriott I met Jim and Bea from Hampton, VA and Ken and Ruth from Ft. Myers, FL in the hotel lobby, along with a few others. They took me under their wings, and took me to lunch too.

We spread the quilt out on the table at the Bob Evans and I showed them things on my dad’s quilt from the service.  His dog tags are there, some medals, the stripes from the sleeve of his uniform, a public library card from Ft. Collins, a US Army Air Force identification card written in Russian, strips of silk fabric with a silk screened map of Europe he was supposed to use had he been captured, and part of a hat he got when he and my mother drove from Michigan to Colorado in the early 80’s for a similar reunion of the483rd.

After lunch it was suggested that I spread the quilt out so those attending the Memorial Service could see it, which I did. Quite a few came by before the service and even more afterwards.

I never did get to meet Harry Millnamow. He lives in the area and wasn’t scheduled to come back until the banquette last night, but I couldn’t stay that long. I hope someone passes along my card to him.

It was wonderful chatting with the veterans and their families, although none of them remembered my dad. With each new group I mentioned the oddball things I remembered my dad telling me about the war. Nobody remembered the crazy colonel or the anchovy factory, but one gentleman remembered the monkey! When he couldn’t quite recall the monkey’s name, it popped out of my mouth: Hypo! (Don’t ask me how that happened!) The monkey hung around the photo lab and “hypo” is the solution used to develop film.

Yesterday was a wonderful adventure. A shoe box of old photographs, even if I could have found them in time would have been OK, but there is nothing like a quilt to start a conversation. I’ve got a copy of Creating Scrapbook Quilts all packed up and ready to mail to Ken and Ruth who asked for a picture of the quilt.

Looking forward to my next adventure!

Read more about the reunion here.

24 thoughts on “An Adventure in Time”