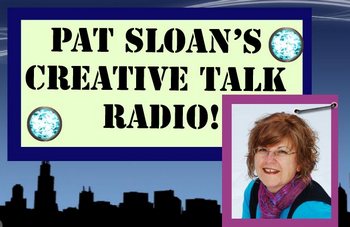 We had cats when I was growing up and one of their favorite paces to roost was on top of the television set. Every time one would jump up there my dad would say, “Hey look! The cat’s on TV!”  Like the cat was being interviewed on Nightly News or something. The clever omission of the “the” made it our family joke.  The cat’s on TV. Ha, ha! (I guess you had to be there.)

Well I’m going to be on the radio, and I don’t mean sitting on it. You’ll be able to hear my voice and everything! And it’s radio on the Internet which probably isn’t even called radio, but I’m old, so give me a break.

I’m going to be interviewed by Pat Sloan on her Creative Talk Network. You can listen to me live “on air” starting at 4pm EST on Monday, October 25th. If you can’t listen live then you can listen to the recording afterwards. You can even download it to your iPod. Isn’t life grand? Hey, remember the television set? It was black and white!

What ever shall we talk about? If there’s something you want me to try and work in, put it in the comment section below. Tell your friends.

Get my blog delivered to you via email every time I write one, or read them online.
If you like me here, please “like me” on Facebook. I Tweet too.
And, don’t forget to read my blogs about the Alzheimer’s Art Quilt Initiative here.