One of my best friends just retired. She stopped wearing a wristwatch. I would go insane without a watch. In fact, I am.

My watch still works, but the “thingy” that holds the strap against itself after you buckle it cracked and fell off.

A new watch band is out of the question as the watch and the band are “one.” The watch still works, I just can’t wear it. To be more exact, I could wear it, but it catches on everything and will probably fall off and land in a bad place, like the Moo Goo Gai Pan trough at the China Buffet. Or I could be rummaging around in my pile of “yet to be ironed” fabric and lose it forever. My luck, my  trusty Timex would fall off in an airport bathroom and I’d just have to wave goodbye as swirled into another dimension.

In case you can’t tell, my watch used to be purple.  It’s been through a lot. It’s an Ironman triathlon. I think that’s particularly amusing as it is obviously a “girl” watch, sized for a  woman’s wrist.

The triathlon is a misnomer too. Mall Walkers like me don’t time laps, although I could if I wanted to. Are there any Tri-Quilt-Athon watches?

I know how to operate each of the wonderful features this watch comes with. I can set it (in two time zones), change from regular to military time, make it beep (and stop it from beeping), set any or all of the three alarms, run the stopwatch, and the countdown timer.  That last option has been particularly helpful. Throw just about anything in the dryer for 10 minutes, hang it on the line, and say good-bye to wrinkles. 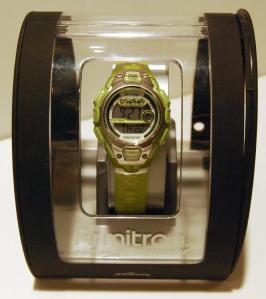 So yesterday I bought a replacement watch. I got a green one. I should have known better when it took the saleslady several minutes to get it out of the mini plastic display capsule.

But it was the only green one. I was willing to go with a different brand even though the icons inhabiting the top third of the watch were too small for me to see. I could make out the time and the date. Did I mention it was green? It also had a timer and stopwatch. 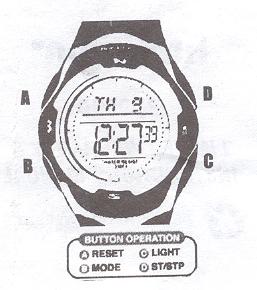 This morning I uncrumpled the directions and attempted to set my new watch, the ones written in type the size of gnat droppings. After a good 10 minutes I realized that Mr. Armitron and I label things differently.  I followed what I believed to be the letters A, B, C, D only to discover that they were A, D, B, C. Makes a big difference.

Just in case you wanted to see all the wonderful features, here are more of the directions. I ironed them (low setting) to get the wrinkles out and then scanned them. They are pretty close to actual size.

I spent another 26 minutes fiddling with the new watch. (I know this because I timed myelf with the old watch. ) I learned that you can ADD and hour, but you can’t subtract one. There’s only ONE alarm. Switching to the second time zone requires pushing more than one button. And I still can’t read the top third of the watch! But that’s OK because the watch is 3 hours and 42 minutes fast. (I couldn’t figure out how to set it either.)

So, today I’m going back to the store, receipt in hand to return it. I’m too stupid to own this watch. I am not too stupid to get it back in the original container, which took some doing, but I have 17 minutes to take care of the transaction. That’s when the watch will start beeping again.

But it’s OK. I fixed my old watch. 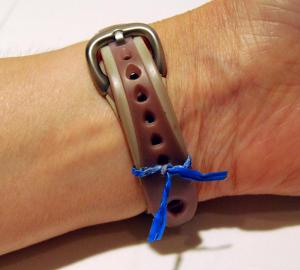 Get my blog delivered to you via email, or read it online.
(By the way, if you like me here, please “like me” on Facebook too, then we can be “friends.”  I Tweet too.)

73 thoughts on “I’m Too Stupid To Own This Watch”