Since I’m using some highly technical jargon here. Let’s move right to the picture. (That’s what we all do when we “read” a quilt pattern anyway, right?)

Don’t feel bad if you didn’t know this. I didn’t for years. Of course I’m the one that never measured the distance between her needle and the side of her foot and just assumed it was 1/4″. HA! I was more like 3/8″ and for 12 years nothing every went together right. But that’s another story. I digress.

There is logic somewhere, about the spool thing, but I don’t know where. Nevertheless, I feel strongly that I am right and you should feed the thread through your machine in the same orientation as they are shown in the cute picture above featuring my left thumb. I took that picture myself, one-handed, obviously. Possibly another reason to follow my advice. (I know things.)

Well all that is just fine, isn’t it? Every machine I’ve ever seen comes with a spindle that goes up and down. The problem is that hardly any of the machines that I own have a spindle that goes side to side —- which wouldn’t be a problem, except that when you put a side-to-side spool on a up-and-down spindle and sew at any speed above a crawl, well then, as they say in River City, you got trouble. (The Music Man is one of my favorite musicals because it is one of the few I managed to load on my iPod and I have been known to sing along, loudly, in embarrassingly public places.)

Yes, you got Trouble (note capital T, just like the song) and the Trouble is that if you sew really fast there’s too much pull on the thread. It feeds slower through the machine and can make your tension wonky. Doesn’t do a lot for the tension on the machine either.  If you go fast enough the spool can fly right off and cause injury. It’s not as bad as sewing through your finger (no comments on that please, I have a weak stomach) but like our mothers said, “It could poke an eye out!”

Add to that, the fact that some of the side-to-side spools have several miles of thread which is GREAT, except that they won’t even fit on your side-to-side spindle. Too many words again. Sorry. We need another picture.

Did you notice my cute little gold-handled, fold-up “Travel or Stay At Home” scissors? They’re sitting on my safe-for-computerized-machines  “Magnetic Pin & Scissor Grabber. ” (Hey, this is a free blog. How am I supposed to buy fabric? A little advertising never hurt anybody.)

So what’s a quilter to do?  Enter the “Wangensteen Thread Lifter” with apologies to anyone out there reading this whose name happens to be Wangensteen, and with a nod of the head to Dr. Owen H. Wangensteeen who invented a similar device for medical pursuits. Normally I wouldn’t know this except that I’m a big fan of M.A.S.H. and Colonel Potter invented one. Wikipedia confirms.

To make a Wangensteen Thread Lifter, take a glass jar and tape a dull pair of shears to the side of it. Put a glob of poster putty on the bottom and “fuse” it to your sewing machine table. Carefully place  the spool of thread inside the jar so it stands upright. (The entire point of this exercise.) A smaller glob of poster putty will hold it in place for a while. Feed the thread through the holes in the scissor handles and then thread the machine.

Problem solved. Kind of. Shrimpy spools fall over inside, big ones don’t  fit in the jar, and the slightest little bump will send the Wangensteen Thread Lifter flying off the table and onto the floor where the thread doesn’t feed all that well at all. It does make a nice cat toy, however. If you have cats. I don’t. 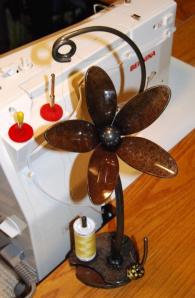 I want to introduce you to Paul from Minnesota. He makes Coneflowers which are one-of-a-kind thread lifters that are as useful as they are gorgeous. They work with all sewing machines, much like the Wangensteen Thread Lifter, but they won’t fall over because they are  made from recycled steel. Heavy.

They work with all kinds of threads which need lifting and they look beautiful sitting next to any machine be it a Bernina or a “boat anchor.” There’s even a place to store bobbins. Wow!

Paul creates three basic Coneflower styles, in single bloom or double bloom, named for his mother-in-law, his daughter, and his daughter in law. (Is that the sweetest thing ever?) When I met Paul he gave me a “Sara” (daughter-in-law). Or maybe it’s a “Barb” (mother-in-law). I don’t care who I have, I just love it to pieces. My tension is perfect, I can run faster, jump higher, and I have better check-ups at the dentist. Seriously, it’s such a good thread lifter I thread it and forget it. And every time I walk by my machine and the chaos that surrounds it, I think what a beautiful piece of art my Coneflower is. And I should really clean up my mess!

After you go shopping on www.AmiSimms.com (remember the little commercial from up above?) you should head right over to visit Paul’s Metal Petals. Tell your friends make them go there too. Both places. Everybody needs little treasures in their lives that make them happy.

Get my blog delivered to you via email, or read it online.
(By the way, if you like me here, please “like me” on Facebook too, then we can be “friends.” And I Tweet too.)