Uncle Bud is one of the more amazing people I know. He happens to be related to me , but I would claim him anyway. My Aunt Elaine is nothing to sneeze at either.

If you are one of my newsletter readers or you have visited my web page over the years, you have probably met Uncle Bud already. He’s a funny guy.

I’ll list some of the funny things he’s written at the bottom of this post in case you need something else to smile about, but first watch this video.

Was that not hysterical? Amazing even?

Here’s the inside scoop.

Missy, the canine star of the show  is my uncle’s service dog. She’s a lab-boxer-beagle-lion-monkey mix. For all her quirks (she hates going outside, dislikes men with boxes, and enjoys turning on the heated seats in my aunt’s car) she is a huge help to my uncle. He has lost most of his sight and she helps him get around.

One of her most amazing abilities is to find the men’s room for him. She’s never wrong! She also remembers where Aunt Elaine parks the car and can lead Uncle Bud to it.

She also enjoys wearing doggie sun glasses and a babushka when they go out. On forays around the neighborhood she sits demurely on his scooter.

The little dog bouncing up and down in the background of the video (and sometimes in the foreground) is Liberty, the plumber’s dog. My aunt and uncle were dog sitting because she doesn’t do well in kennels and her people had to go out of town.  Liberty and Missy are good friends.

My cousin Niki works for Peggy Adams Animal Rescue League in West Palm Beach, Florida.  She fostered both dogs and arranged their adoptions. At the end of the video is a phone number to make a donation to the Rescue League if you like. My cousin Mindy has just opened Glamour Paws Salon in Tequesta/Jupiter, Florida. Just in case you have a dog who needs to look gorgeous.

My cousin Simm (no, that’s not a typo) and her husband Doug are videographers. Doug shot the video and he’s an amazing musician. He never goes anywhere without a flute and entertains everyone with impromptu music as the spirit moves. Simm is an accupuncturist and a very talented photographer and if she had married my husband instead of me, she would have been Simm Simms! 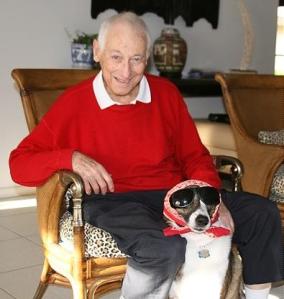 So much for the shameless promotion, except that you can EMAIL my uncle for the “directions” on how to teach your dog to read.  He will send you an MS Word file so you can print out your own cards and instructions.

My uncle is checking You Tube stats hourly. Would you like to make an 80-year-old guy really happy? See how many people you can get to watch this video. Forward this blog to them, or email this link: http://www.youtube.com/watch?v=6W-CSIvMHYM

Get my blog delivered to you via email, or read it online.
(By the way, I Twitter too.
And I friend quilters on Facebook!)

25 thoughts on “Teach Your Dog To Read”