Jannett Caldwell and her daughter Sandy Powers came up with one of the best ways I’ve seen to raise money for the Alzheimer’s Art Quilt Initiative. Not only did they challenge their guild, the Ladybug Quilters of Newark, DE, to create Priority: Alzheimer’s Quilts for us, but at the guild meeting I attended last month they displayed the quilts pinned to a clothesline at the front of the room. They didn’t stop there. They wanted to award a Viewer’s Choice for the best quilt donated. Guild members voted with dollar bills (and some higher denominations too)! 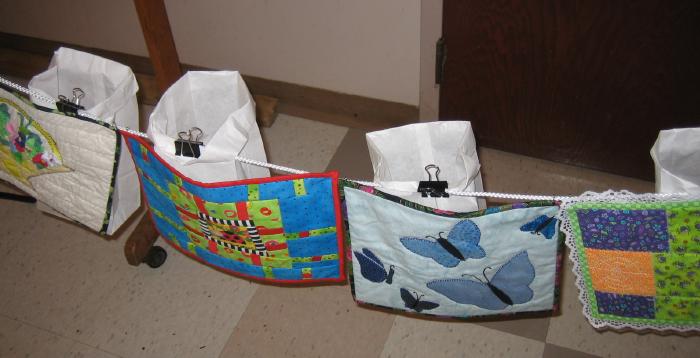 You’ll notice that there is a small paper lunch sack clothes pinned behind each Priority: Alzheimer’s Quilt. Guild members stuffed dollar bills into these clever “ballot bags” and raised a tidy sum for the AAQI.

Thank you for the beautiful quilts (some not shown in photograph),  for the additional funds you raised for Alzheimer’s research, and for this great idea!