I just returned from Goshen, Indiana where Madison and I were invited to give the keynote speech for Greencroft Goshen’s 20thAnnual Alzheimer’s Seminar. Afterwards Madison helped me tell how service dogs can help people with Alzheimer’s in the break-out session. This was in conjunction with the “Alzheimer’s: Forgetting Piece by Piece” exhibit which was displayed there. 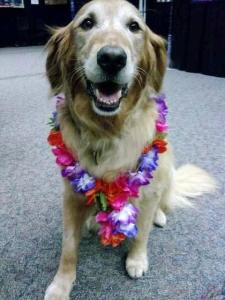 The Maple Leaf Quilters also coordinated an evening just for quilters in the Goshen area and I got to give two presentations.  Madison did a great job being a “good dog” while I spoke. He showed off some of his many skills afterwards.

When Madison wasn’t in his service dog backpack “working,” he was in casual attire. (He’s wearing a Hawaiian shirt in the photo above.) He also wore a tuxedo on the day the exhibit opened and a tie-dyed T-shirt on the last day. (I can’t remember what I wore.) His tail wagged so often it will probably be sore for a week! I had way too much fun having him along on the trip. 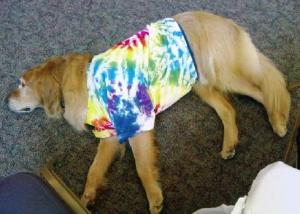 Jennie came in after work on Friday night to help. It’s not often my family gets to see me lecture, so that was fun too. Jennie is responsible for these great pictures.

I also got a chance to visit with my friend Ida, who taught me how to quilt more than 30 years ago. It was great fun to catch up with her, two of her daughters, and a granddaughter.

No, I’m still not unpacked, and the quilts head out to Lansing, Michigan for the Michigan Quilt Network show at the Lansing Center September 11-14. Dog has to stay home.

Get my blog delivered to you via email, or read it online.