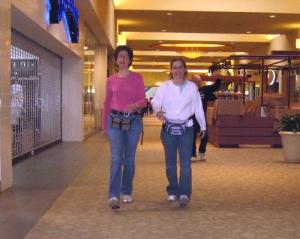 My first introduction to mall-walking was about 10 years ago. It was just before Christmas when the stores open early and I thought they opened even earlier than they did. I walked into our mall and there were about 100 people, mostly senior citizens, shuffling counter-clockwise. I was dumbfounded. It looked like The Invasion of the Body Snatchers. Despite thinking I might be part of some psych experiment, I had time to kill so I trudged around with them for a few laps before the stores finally opened.

Eventually I came back for the exercise, first with headphones and speedy walking tapes. (To keep from going stir crazy I counted how many people I passed . Considering most of the other walkers had 20 years on me occasionally I got into triple digits.) I gave it up during the years I race-walked, and then came back to it a few years ago.

Debbie and I walk every morning before work, planning the day’s strategy. Sure beats walking in circles alone. Want to join us? Genesee Valley Center (also called “The Mall”) in Flint township. Park by the Sears door at 8am. (I’m always late.) As soon as it gets warmer (above 50) we’ll be outside with Madison. Two laps inside or one lap outside. And we walk clockwise outside just to shake things up. We’re such renegades.

Update 2018: Now I run around the house listening to Pandora in my jammies. I attempt to do as many household chores as I can at warp speed and in the least economical way possible. I bring up folded laundry from the basement one garment at a time and deposit it my bedroom closet on the second floor. That’s two flights up and two flights down. It’s all about that stinkin’ Apple watch. I have to get in 30 minutes of cardio every day or else my circle won’t close. I am a lemming. A toned and somewhat fit lemming.